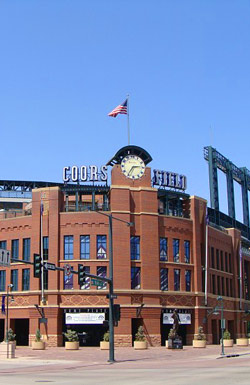 The Ballpark neighborhood lies to the north of Lower Downtown and Downtown Denver's central business district. The southern end of the neighborhood (around 20th Street) is anchored by Coors Field, which opened in 1995. Ballpark also stretches almost 20 blocks to the north from 20th Street, into a section of Downtown that is still very much a functioning warehouse and light industry district. An increasing number of those warehouses are being renovated into loft projects.

A Piece of Denver's Diverse History

This part of Downtown was established early in Denver's history, growing alongside the railroad tracks that carried goods and raw materials into Denver's industrial market. Waves of immigrants — Italian, Irish, Japanese, Chinese and, more recently, Mexican — have left their own unique stamp on the area.

An important commercial corridor in the Ballpark neighborhood is North Larimer Street. From 20th Street all the way to the northern edge of stretches of Downtown (37th-38th Avenue), Larimer Street offers a unique mix of buildings and tenants — pawn shops, jazz clubs, bars, antique shops, art framers, galleries, brewpubs, authentic Mexican restaurants, small ad companies and more. Most of these buildings reflect the area's predominant architecture, which is 2-3 story brick buildings and warehouses. The neighborhood is zoned for industrial use, so a good number of the buildings still have train and truck loading docks on their street frontages, as many of them are active warehouses and light industrial buildings. Not every building frontage has a sidewalk, and street trees are as not prevalent as they are in older, more traditional center city neighborhoods such as Curtis Park or Capitol Hill.  In 2002, a the Ballpark Historic District was formed for much of the Ballpark area to preserve many of the historic warehouses and buildings that define the neighborhood's historical uses.

A major change in the Ballpark neighborhood's landscape was the demolition of the Broadway viaduct in 2000, which carried auto traffic from Broadway, over the adjacent Central Platte Valley train tracks, and north along Brighton Boulevard to I-70 for several decades. The viaduct's bridge structure sliced through the middle of the neighborhood, but is now replaced by a four-lane underpass; two sets of train tracks cross overhead, much like the 15th Street underpass that was completed earlier this decade. This enhances the Ballpark's pedestrian environment and improves its visual and pedestrian connection to Downtown Denver. It has also spurred new opportunities along Brighton Boulevard, which is a direct link from I-70 to Downtown Denver.

Nestled on a quiet cul-de-sac, this ranch home offers convenience to downtown Denver while providing a retreat from commerce. Brand new carpet in the main area of the hom...

This gorgeous remodeled townhome won't last! You won't find a comparable home at this price point in the Cherry Creek School district. The spacious, gourmet kitchen is p...

Courtesy of The Agency - Denver

Courtesy of The Agency - Denver

OPPORTUNITY TO OWN FABULOUS BRICK RANCH IN THE DENVER CITY VIEW HEIGHTS SUBDIVISION. THIS HOME HAS BEEN LOVED AND WELL CARED FOR. THIS SWEET HOME HAS TWO BEDROOMS ON MAI...

Simply Charming! This sweet, white clapboard home sits on an amazing, mature corner lot in the fabulous community of Mar Lee Manor. Yes, it is dated but in great conditi...

The content relating to real estate for sale in this Web site comes in part from the Internet Data eXchange (“IDX”) program of METROLIST, INC., DBA RECOLORADO® Real estate listings held by brokers other than Real Estate Company are marked with the IDX Logo. This information is being provided for the consumers’ personal, non-commercial use and may not be used for any other purpose. All information subject to change and should be independently verified. IDX Terms and Conditions