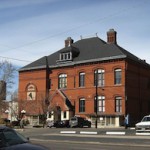 Alamo Placita is a neighborhood in Denver, Colorado.  Technically, it is part of the larger neighborhood known as Speer, but Alamo Placita has such a distinctive character of its own that many Denverites consider it a separate district of the city.

The neighborhood is named after Alamo Placita Park, located on Speer Boulevard between Emerson and Ogden streets.  One of the hallmarks of the Alamo Placita area is the willingness of the residents here to embrace the ‘arts and crafts’ architectural style, which resulted in the construction of many bungalow and foursquare residences.  In wealthier areas of the city, inhabitants were more likely to adhere to the architectural style of Classical Revival, which they felt best expressed their wealth and status.  The residents of Alamo Placita, on the other hand, recognized the practical nature of newer architectural styles.

Over time, a smattering of other styles began to become popular in the neighborhood.  These included Tudor-style houses with faux half-timbered eaves and Spanish mission style residences that incorporated heavy use of thick adobe walls covered in stucco and topped with red tile roofs.  In this way, Denver condos, lofts, duplexes, and houses in Alamo Placita came to have a rich character that reflected the multicultural nature of the western United States itself.

In 2000, Alamo Placita received official recognition of its architecture when the Denver Landmark Preservation Commission recommended it for designation as the Alamo Placita Historic District.