If you are considering buying a home in the downtown Denver area with history and soul, Curtis Park may be what you’re looking for. 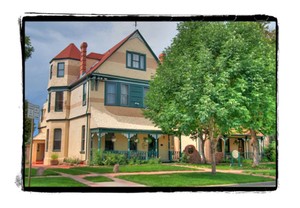 Denver’s oldest neighborhood began in the 1880s and continued to flourish until the 1950s when there was an exodus into suburban neighborhoods. Always an eclectic neighborhood, Curtis Park’s tree-lined streets are framed by Italianate row homes, Victorian mansions and picturesque Queen Anne bungalows that reflect a once-upon-a-time.

Denver Neighborhoods - A Hip Place to Be

The Curtis Park neighborhood is a hodgepodge of neighborhoods cumulatively considered Five Points. If you were standing on 30th and Larimer and walked kitty corner, you are in the Curtis Ballpark area. And if you crossed Larimer towards Walnut you are in RINO (River North). Those designations are used loosely, but no matter how you use it, a lot of development has happened due in part to a NODO (Northern Downtown Denver) development effort backed by a grassroots group of Curtis Park neighbors who formed the Curtis Park Investors Group (CPIG), which has turned this residential "has-been" into a hip place to be.

An incredible amount of transformation has occurred in 2012 in a neighborhood that only a short time ago was full of machine shops and vacant buildings.

In January the Mile High Spirits, a micro-distillery opened its doors on 29th and Larimer producing Elevate Vodka, Pegleg Rum and Denver Dry Gin. The River North Brewery opened in February located just north of downtown Denver on 24th and Blake Street, technically located in the Ballpark neighborhood at the southern tip of the RINO district. Its quaint tasting room showcases its brewing facility just behind the bar.

Several months later, in October, Our Mutual Friend brewery located at 2810 Larimer Street opened. Their beers are brewed using local sources and farms for their ingredients; 100 percent of their barley is from Colorado.

Of course, it’s not all about booze.

In May, the Vegan Neat Market began setting up shop every third Sunday of each month at the Laundry on Lawrence. 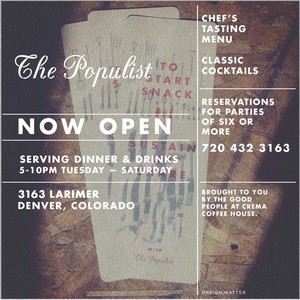 But if all of this hasn’t convinced you that Curtis Park is the place to buy a house, that things have truly turned around; how about the opening of a fine dining restaurant in November called the Populist? They feature small shared plates of modern American cuisine whose menu changes seasonally. The Populist was opened by the owners of the beloved Curtis Park coffeehouse, Crema located on 29th and Larimer.

The opening of such original and hip places has led to a transformation of a gloomy hood into a safer, friendlier, enlivened neighborhood and reinvigorated a once-upon-a-time story for future home owners looking for something rural and razzmatazz.