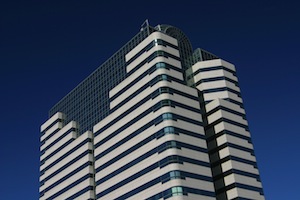 Bounded by North Colfax Avenue, Speer Boulevard and East Broadway in Denver is a neighborhood known as the Golden Triangle.  Also called the Civic Center, this part of the city is one of the most historic parts of Denver and contains many of the cultural and civic buildings that give the city its unique character.  The new Central Library opened its doors here in the 1990s and ushered in an era of revitalization of the area, including a renewed interest in Denver lofts and condominium complexes.

The Golden Triangle / Civic Center neighborhood features the city's art museum, which finished an additional wing in 2006, and a new justice center that opened for business in 2010.  The nearby Civic Center Park features an abundance of fountains and statues as well as formal manicured gardens that attracts neighborhood residents throughout the spring and summer months.  The park is exceptional in that it also includes a Greek amphitheatre, the Voorhees Memorial Seal Pond, and a war memorial laid out within its neoclassical symmetrical design.  Located alongside the large park are the Colorado State Capitol, the Colorado State History Museum, and the City and County Building of Denver.