Things to Do in Denver: The Denver Zoo 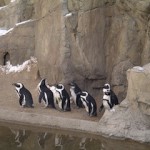 Families with children would do well to consider Denver as a possible relocation site for many reasons, but chief among them should be consideration of the city's excellent zoo.  Many children in the United States grow up without access to a major zoo, long considered one of the hallmarks of an idyllic childhood.  Now, educational research suggests that experiences such as trips to zoos and museums prepare students for success in school.

The Denver Zoo sits on 80 acres in the City Park.  Owned by the city and county of Denver, the zoo is funded by a special district called the Scientific and Cultural Facilities District.  The zoo is well regarded by residents here; in fact, in 2005, it was the single most popular paid attraction in the city.

The zoo began in 1896 with the donation of an American black bear that had been orphaned in the wild.  The facility quickly distinguished itself as one with great care and concern for animals; the Bear Mountain habitat constructed early on made the Denver zoo the first in the nation to use natural enclosures rather than bars and cages to contain animals.