Historical Boulder -  Real Estate at the Base of the Rockies 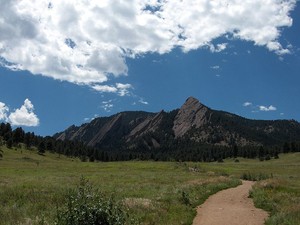 The city began as a small mining camp on the banks of Boulder Creek. The first settlers, led by Thomas Aikins, were prospectors and arrived at Boulder Canyon in the fall of 1858. They called their campsite Red Rocks because of the red sandstone cliffs.

Friendly contacts were made with Chief Niwot and the Arapahoe tribe. The Cheyennes were also indigenous to the area, while other tribes, including the Utes, Kiowas, Comanches and Sioux, were occasional visitors. In January 1859, gold was discovered at Gold Run, an area west of the present Gold Hill community and approximately 12 miles northwest of Boulder. This helped form Boulder City Town Company in 1859 by A.A. Brookfield, the first president and 60 shareholders. Boulder was designated as the county seat in 1867.

A Town Named after Rocks

The city was named because of the many huge rocks which needed to be moved before they could construct their cabins. Native American uprisings and the decline of the nearby gold camps resulted in several hard years. In 1871, however, the a railroad and a university brought city to life, and the town of Boulder was incorporated under the Territorial Government. Two years later, both the Colorado Central Railroad and the Denver-Boulder Valley Railroad reached the city.

While early laws pertained to dog control and $10 charge to saloons to operate, later ordinances focused on open space, environmental protection and historical preservation. Today, the city encompasses about 27.8 square miles at the foot of the Flatirons with a population of over 96,000.

Boulder is known for a ring of open space, called a greenbelt, that has been built up around it over the past 20 years. In addition to a city-imposed 1% limit on housing growth, the city also adopted a long-term Transportation Master Plan with a goal of a 0% increase of cars on Boulder roads. These efforts are working to preserve the high quality of life many have come to know and love about this unique and famous city.

Home of the CU Buffaloes

The city is also the home of one of Colorado's finest schools, the University of Colorado. Officially started in 1877, the university is known for its excellent academic programs and a terrific athletic program. The school boasts of five Nobel laureates and countless awards. Many parts of the city are centered around the campus and the residents and students thoroughly enjoy the quality of life and recreation the area has to offer.